The 24th annual concert by the South London Fellowship Band at the United Reform Church in West Wickham commenced in patriotic style with the march ‘Britannia’ after which the mood became more thoughtful by the playing of ‘Mid all the traffic’ leading to a prayer by Roger Gadsden.

After some warm comments of welcome, the congregation joined in singing ‘At the name of Jesus’ and then the first of a number of items from the ‘classical’ repertoire was presented by the band in the form of 3 movements from Schubert’s 5th Symphony.

Following this item our guests for the evening brother and sister Kirsten Nielson (violin and piano) and Tom Nielson (cornet, trumpet and Flugel horn) presented their first block of items. 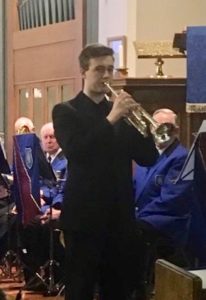 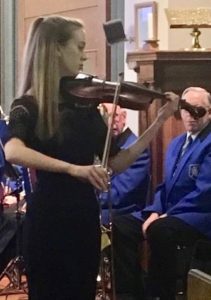 Tom chose 2 contrasting items from the pen of Peter Graham which took us from the exciting cornet solo ‘Whirlwind’ to the more contemplative ‘A time for peace’ played on flugel horn.

Kristen’s items throughout the evening were from the classical repertoire and here she played the first movement of Vivaldi’s ‘concerto in A minor’ and Faure’s ‘Apres un reve’.

The band then formed into a male voice choir to sing ‘Whosoever Heareth’ which was followed by the playing of ‘Alone yet not alone’ featuring principal baritone player John Clarke and an item considered by many to be a Salvation Army classic ‘A pilgrim song’.

After refreshments provided by the URC, the second half of the programme commenced with the bright and demanding march ‘Call of the gospel’ following which, the congregation were given an opportunity to sing again with the very popular song ‘In Christ Alone’.

Our guests for the evening were again featured – Kristen played ‘Melodie’ by Gluck and ‘Meditation for Thais’ by Massenet followed by Tom with the melodic ‘Someone to watch over me’ by Joseph Turrin and the lively ‘Tico Tico’ by Abreu (arranged by Iveson). Kristen then demonstrated her versatility by playing the lovely ‘Girl with the flaxen hair’ at the piano.

A thought provoking period commenced with the playing of ‘All the world is waiting’ by the band, after which Adrian Horwood spoke about what the world is waiting for and led in to ‘Pie Jesu’ – words translated as ‘Merciful Lord, who lifted the world’s sins – grant us peace’ – which was a combined item of the band and both our guests.

The evening ended with the march ‘Bournemouth Centennial’ 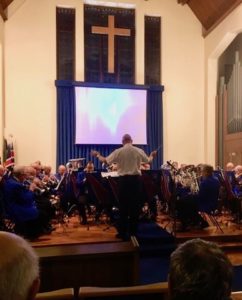