The band provided a varied and delightful programme of music, starting with the rousing march ‘The Witness’ in recognition of the Witness session from which Lt. Col. Thomas was commissioned in 1934. The band further contributed Mozart’s ‘The Magic Flute’, ‘Songs of the Morning’ and ‘I’ll Walk with God’.

Vocal items included soloist Les Swift with ‘You Raise Me Up’ and band vocal items ‘Sound the Battle Cry’ and ‘Rock of Ages’, the latter of which brought particular blessing.

Audience participation was encouraged with Congregational Songs ‘Lord for the Years’ and ‘God’s Soldier’ and the band’s presentation of ‘A Glenn Miller Collection’.

The bible reading and thought was presented by Roger Gadsden and he reviewed how much the world has changed over the last 100 years but reminded us that God is the same yesterday, today and forever. A tribute was presented by Nigel Parrington, Chief Executive, Salvation Army Housing Association and Major James Williams (Retired Officers Secretary, THQ) extended words of congratulations on behalf of the Chief of the Staff (Commissioner Barry Swanson) and the Territorial Commander (Commissioner John Matear).

The highlight of the evening was Lt. Col. Thomas giving humbling words of thanks and expressing her joy at how much God has blessed her so much in her life and how much she continues to be blessed each and every day.

An appeal was made by Major Williams in aid of the continuing hard work at Sunset Lodge and Charles Court and £770 was raised from the evening’s collection. 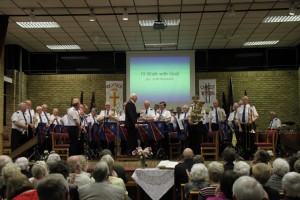 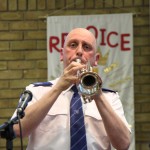 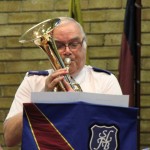 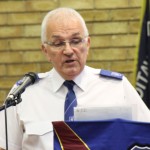 Les Swift Singing You Raise Me Up 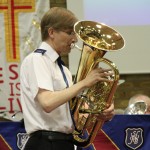