Report on the Eric Ball Night at Maidstone 19th October 2013

The South London Fellowship Band played hosts at Maidstone Corps to The Medway Band (Musical Director, Melvin White) to celebrate the 110th anniversary of the birth of Eric Ball (1903-1989) O.B.E.

The evening commenced with the SLFB playing one of Eric Ball’s most popular marches, ‘Star Lake’, to welcome The Medway Band as they took their place on the stage.

Melvin White introduced each of The Medway Band’s items providing the audience with an insight into both the music and his own background; with his links to Eric Ball and the Salvation Army at the Chalk Farm Corps.

The band commenced their contribution to the evening with the March ‘Torch of Freedom’, which gave the audience a taste of the fullness of sound to come from this group during the evening. This was followed by the final section of Eric Ball’s arrangement of Mozart’s ‘Eine Kleine Nachtmusik’.

Melvin White introduced the next item, ‘Hendon Humoresque’, as an item written in 1981 but still remaining unpublished. It featured each section of the band as a ‘solo’ section at various times during the piece.

The band then featured the Cornets and Trombones in ‘Quid Pro Quo’ written in a very similar style to the “Army” Double Quartet ‘Never Give Up’.

A number of pieces from the pen of Eric Ball have featured as test pieces at various band contests and the band’s next item was representative of these as it presented a spirited rendition of two movements from ‘Tournament for Brass’.

The band’s final contribution, ‘The Eternal Presence’, is one of the most difficult pieces published by the Salvation Army and stretched the band’s abilities to the full. A number of people were heard to say that this performance was the highlight of the evening.

Following the congregational hymn ‘Peace in our Time’ the South London Fellowship Band commenced their part of the programme with the March ‘The Gospel Feast’. This was followed by the Air Varie ‘The Old Wells’ which showed the SLFB’s ability to produce a wide range of tonal colour in their performance.

Adrian Horwood then presented the Euphonium Solo ‘To a Wild Rose’ with his usual sensitivity to the requirements of this lovely melody.

Following a Scripture Reading and Thought from Stuart Gilbert the band then played the Meditation ‘Songs in Exile’ with a sensitivity to the requirements of the music gleaned from the many years of banding represented by the band.

The SLFB’s final contribution to the evening was one of Eric Ball’s later publications ‘Challenge and Response’, which is rarely used due to the challenges it imposes on every section of the band. The band gave a very creditable performance for its first presentation of this number.

The bands then combined to present the Tone Poem ‘The Kingdom Triumphant’ which is designed to remind listeners to prepare for the Second Coming of Christ at the end of time, ending with Charles Wesley’s words – ‘Lo! He comes with clouds descending, Once for favoured sinners slain; Thousand, thousand saints attending, Swell the triumph of His train; Hallelujah! God appears on earth to reign.’ This for many was another highlight of the evening with both bands giving of their all at the end of an enjoyable evening.

Finally the bands brought the evening to a rousing conclusion with the March ‘Torchbearers’.

With such a variety of items it is hard to believe that all this music, and much more, came from the God-given gift of just one man.

Melvyn White conducting the combined bands in “The Kingdom Triumphant” 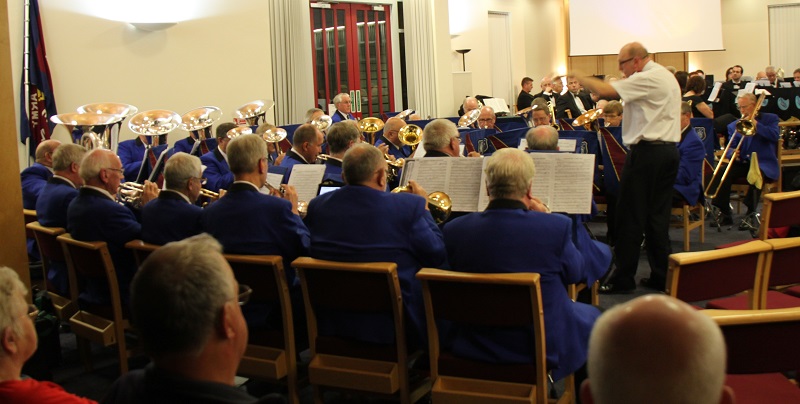 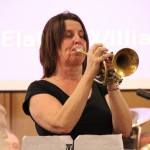 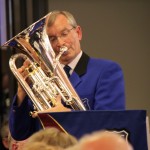