On Friday 28thSeptember the band visited Blackpool Citadel. It was to be a memorable journey fraught with traffic delays from start to finish. Stuck in the cortege that was the M6 at its worst, it became necessary to rethink our arrival plans, postponing the intended check-in at the hotel until after the evening concert. It was 6.05 when we finally arrived at the Citadel and with the programme scheduled to start at 7.00 we somehow managed to do justice to an excellent meal, unload the coach, get set-up, change into our uniforms and commence playing by 7.20. 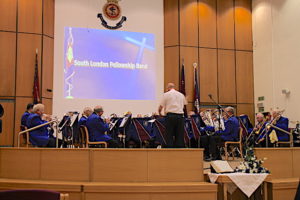 We opened-up with the march ‘Lightbringer’ (a coals to Newcastle moment, given the host town was at the peak of its illuminations season) and immediately followed this with ‘Mid all the traffic of the ways’. Though a similarly ironic choice given the travel impediments experienced that day, the calming effects of Len Ballantyne’s arrangement re-focussed the band’s playing for the rest of the evening ahead.

Though not billed as solo performances, special mention must be made of John Clarke’s rendition of the starkly exposed baritone melody in ‘Alone but not alone’and Roger Gadsden’s tenor horn obbligato in ‘What will you do with Jesus?’, both contributing significantly to the impact of those items.

Our ‘major work’ for the evening was a performance of Dean Goffin’s ‘Symphony of Thanksgiving’. Though full of individual difficulties for every player, the band should be allowed a modicum of self-satisfaction for a fine performance, warmly endorsed by the most appreciative audience.

A moment of reflection was contributed by John Moye, basing his thoughts around some well-chosen verses from Philippians 2.

Other items featured during the evening were ‘The Crystal Tide’, ‘In God’s Presence’and the march ‘Britannia’.

A long but ultimately satisfying day ended, the highest commendation must go to our patient and skilful coach driver, Colin Richardson.